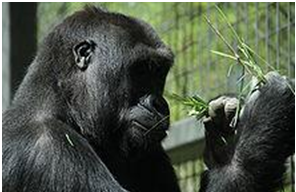 Located deep within the forests of Rwanda, the mountain gorillas evoke an awe-inspiring, endearing and somewhat intimidating feeling amongst those who visit them. Watching them from afar, tourists feel a sense of familiarity yet trepidation as they watch these wild animals within their natural habitat. For some, a visit to see the Gorillas in their natural habitat is the trip of a lifetime and many will seek a memento of their time, such as an Animal Sculpture of a Gorilla that can be found at https://www.gillparker. Gorillas have fast become an animal that many people are interested in and many different items can be found to adorn your house with images of these beloved creatures.

According to the World Wildlife Fund, the mountain gorilla is an incredibly vulnerable species. During the last century, it was the victim of human intrusion, poaching, and illness, which caused a vast drop in its population. Although steadily growing again today, just 900 of these gorillas remain within the Rwanda, Uganda, and Congo areas. This emphasizes the importance of the conservation projects for this animal, with the Volcanoes National Park in Rwanda an integral part of this.

Over 20,000 people visited the conservation site in 2014, with Rwanda gorilla trekking becoming an increasingly popular tourist activity. This number of visitors is over three times the amount seen in 2003, with many visitors traveling from Germany, Britain, the United States, Australia, and Canada.

On the tours, groups are taken on walks that take them to the homes of gorilla families, with one family called Amahoro (meaning ‘peace’) located up a volcano. The group is warned to remain quiet, not to point at the gorillas, and to remain seven meters away from them. Should a gorilla approach, they should crouch down, avoid eye contact and make a sound likened to the clearing of the throat − something the gorillas do when they want to express a sign of friendliness.

Much-needed revenue brought to the area

The conservation projects within Rwanda are not just benefiting the endangered mountain gorillas, as approximately 20% of the revenue generated is injected into local clinics, schools, and community projects.
Located two hours from Kigali, the capital of Rwanda, Volcanoes National Park has welcomed many famous faces, including Bill Gates, the co-founder of Microsoft. With their humanistic ways and powerful nature, these gorillas continue to entrance all who are lucky enough to see them in their own territories.